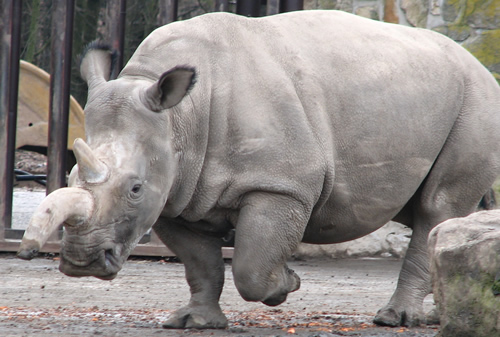 Four of the world’s eight surviving Northern white rhinos are about to be flown from ZOO Dvůr Králové in the Czech Republic to Kenya’s Ol Pejeta Conservancy.

This weekend, Northern white rhinos Sudan, Suni, Najin, and Fatu will begin the journey of a lifetime: A new life in Kenya – and the last hope for one of earth’s rarest creatures.

The move is a final effort to preserve the genetic material of the Northern white rhino (Ceratotherium simum cottoni), now considered extinct in the wild due to poaching. Many experts believe that hormonal changes induced by the natural environment at Ol Pejeta will make the females receptive to breeding – something that has not occurred frequently enough in captivity.

Although ZOO Dvůr Králové’s project has sparked a heated debate within the rhinoceros conservation community, supporters of the move include Ol Pejeta Conservancy, Fauna & Flora International, and the African Rhino Specialist Group (AfRSG).

We are also acting on the basis of the expert advice and information assembled by the African Rhino Specialist Group Secretariat based on input and comment from eight AfRSG members in Africa and other internationally recognised experts in the fields of conservation biology, genetics and white rhino ecology; and the AfRSG Secretariat’s endorsement and ongoing support of the project.

Transport crates have been placed in the rhinos’ enclosure in order for them to become acclimated to going inside. The crates will reportedly be heated for the rhinos on their journey.

A new life in Kenya

The rhinos’ destination, Ol Pejeta Conservancy, has a strong track record of breeding and protecting rhinos, and is the largest black rhino sanctuary in East Africa.

The conservancy is developing a breeding herd of white rhinos with its founder population, and welcomed its first white rhino calf in February 2008.

It is hoped that hybrid calves will be produced as a way to preserve the Northern white rhino subspecies, with AI being used as an alternative measure.

Will the rhinos survive the journey?

However, organizations such as the European Association of Zoos and Aquaria (EAZA), International Rhino Foundation (IRF), and Save the Rhino International (SRI) are opposed to transporting the rhinos.

Earlier this week, Safari Archa 2007 held a protest in Hradec Králové. Roman Komeda of the group stated via CeskeNoviny that the move endangers the rhinos’ lives.

The swings of temperature between the Czech Republic and Kenya will be enormous. This puts the animal lives at stake. If only someone reasonable decided that the transport be postponed for next spring or summer, but other pressures seem to be exerted.

Most of the rhinos were born in captivity and have no natural antibodies to protect them.

The three captive born rhinos are Fatu, who is the youngest of the rhinos at age nine. Najin is 20, and Suni, 19. Only Sudan, now at the advanced age of 38, was born in the wild.

IRF and SRI believe that the journey especially places elderly rhinos such as Sudan at significant risk.

Regardless of destination, there is a real risk of older animals dying during an extended transport.

Zoologist Kristina Tomasova, said via AFP the temperature fluctuation will be too much for the rhinos.

Three of the four rhinos were born here, and they are used to regularly changing cold and warm periods. At present, they are programmed for a cold season.

Even if the animals survive the journey, they will be immediately exposed to temperatures around 40 degrees C (104 degrees F). They will find it difficult to cope.

As the Northern white rhinos stand at the brink of extinction, time is definitely not on their side. But if these precious rhinos somehow survive the risky journey from the Czech Republic to Kenya, then there is the possibility that this subspecies will persevere.

We must offer them this last chance, in their natural environment in Africa.

Fatu, Najin, Suni, and Sudan: All the best for a safe journey – and a prolific new life in beautiful Kenya.