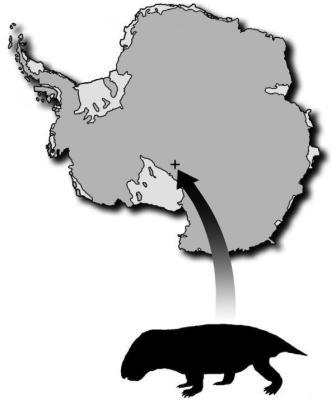 The largest mass-extinction in the world is considered to have happened about 252 million years ago due to quick global warming or climate change. A new study shows how some ancestors of mammals are believed to have survived this mass-extinction.

Jörg Fröbisch and Kenneth Angielczyk from The Field Museum along with Christian Sidor from the University of Washington have recently identified the fossil remains of such a species in Antarctica.

The species — Kombuisia antarctica — is part of a larger group of extinct relatives of mammals called anomodonts. These animals were the dominant plant eaters of their time. Fröbisch, the lead author of the study, says: “Members of the group burrowed in the ground, walked the surface and lived in trees.” These little creatures were considerably different from mammals in a few respects, though. Angielczyk, Assistant Curator of Paleomammology at The Field Museum, says: “Kombuisia antarctica, about the size of a small house cat, was considerably different from today’s mammals — it likely laid eggs, didn’t nurse its young and didn’t have fur, and it is uncertain whether it was warm blooded.”

Fröbisch’s earlier career work showed that Kombuisia antarctica or similar animals should have existed at this time — similar animals had been found in South Africa from a later portion of the Triassic Period — but fossils of such animals were not identified anywhere. These new findings in Antarctica fill the missing gap in the fossil record. They also show, clearly, how some animals survived the quick climate change — they moved to Antarctica.

At that time, Antarctica was also a little further north, warmer and did not have permanent glaciers. But in any case, this finding shows what some animals had to go through to survive at a time when most of the species did not.

This is an interesting part of animal and mammal history, and also interesting when we consider the current climate change scenario the human species may be creating.