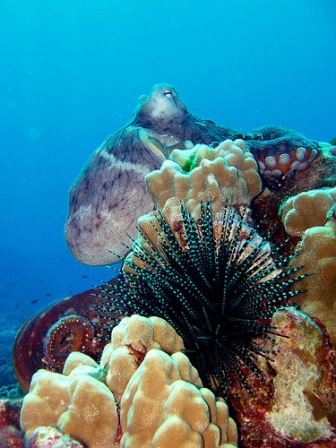 As scientists continue to show, the oceans absorb CO2 and keep it from going into the atmosphere. Thus, they help to protect against global climate change. However, this is looking to be perhaps an even bigger problem than climate change!

When oceans absorb this CO2, it makes them more and more acidic. “Since the industrial revolution, the ocean acidity has increased by 30%,” according to Lisa Suatoni, Ph.D. If we continue polluting CO2 as we are now, “ocean acidity will double by the end of the century compared to pre-industrial times. That is a big problem.”

A beautiful short video of the issues related to this, the oceans, and the challenge we are facing follows. It includes commentary from leading scientists and narration by Sigourney Weaver.

One of the best videos I’ve seen in a long time!

“Thousands of ocean species build protective shells to survive. Some of them are so prolific they can be seen from space,” the Natural Resources Defense Council (NRDC) informs us.

It is expected that greater acidity may eradicate numerous ocean species, especially the smaller ocean species that larger ocean animals (and, indirectly, land animals as well) rely on. Thus, it may eradicate a lot of the species in the ocean and on land.

Coral reefs, home to a major portion of the ocean and world’s species, “are particularly sensitive to ocean acidity,” according to Ove Hoegh-Goldberg, Ph.D. “We may lose those ecosystems within twenty or thirty years.” About one million species are estimated to directly live on coral reefs — “one in every four species in the ocean, lives on a coral reef.”

According to the NRDC, “Marine life that might withstand warming temperatures or rising acidity, may succumb, when confronted by both.”

The call is clear. Halt CO2 emissions, or cause the extinction of more species than in millions upon millions of years.

Hopefully, we will hear the call and respond.

Image Credit: JLambus via flickr under a Creative Commons license