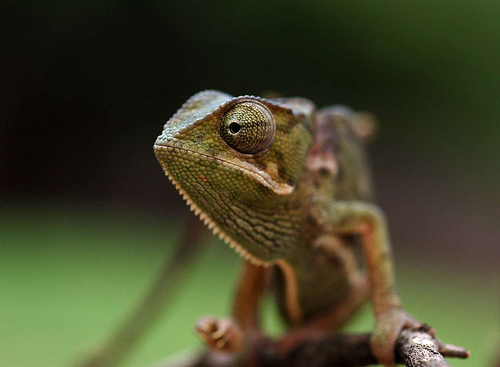 A snake in Tanzania was enjoying a leisurely bite to eat, when a scientist walked nearby.  The startled twig snake spit out the undigested meal and sped off, leaving the dead lizard at the feet of Dr. Andrew R. Marshall, a scientist from the University of York’s Environment Department.

Fearing the creature may be venomous, Marshall, who was in the forest surveying monkeys at the time, first photographed the chameleon. The specimen was then collected the next day. The chameleon, identified as a previously unknown species, was named Magombera chameleon, Kinyongia magomberae.   The little lizard measured about 6 inches in length, had blue dots on its limbs and sported a short and scaly horn-like structure on its snout.

A second Magombera chameleon was later spotted just miles away.  The chameleons were seen in the protected area of the Udzungwa Mountains National Park and the unprotected Magombera forest.   Only a few specimens have ever been observed.

After examinations and analysis, the new discovery was finally confirmed.  “It takes quite a long time to convince the authorities that you have a new species.”   Although the discovery of the new species actually was made several years ago, the paper, New Species of Chameleon (Sauria: Chamaeleonidae: Kinyongia) from the Magombera Forest and the Udzungwa Mountains National Park, Tanzania, was recently published in volume 58(2) of the African Journal of Herpetology.

A photograph of the Magombera chameleon is available on the University of York website.