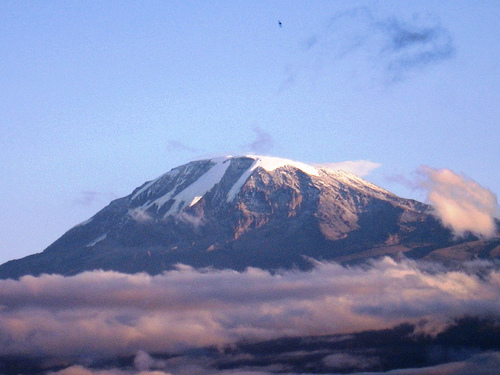 Despite the fact that Mount Kilimanjaro is located in one of the world’s warmer climates, like any other mountain with such high altitude, it has snowy peaks and glaciers that add interest to climbers, (although it doesn’t do much for the wildlife on the mountain); however, according to research, as a result of climate change, we can expect that snow atop Mount Kilimanjaro is a fleeting thing.

Evidence shows that until the last century, climate change had very little to no impact on the snow and ice that covers Kilimanjaro’s highest peaks – there’s evidence that some of it might have been there for approximately 4,000 years and has never showed signs of melting. However, that has all changed in recent years with global climate change taking a rather significant toll on the mountain. According to Paleoclimatologist Lonnie Thompson, approximately 85% of the snow and ice that was on Africa’s tallest mountain in 1912 has since disappeared, and even in the new millennium, evidence shows that there’s been a 25% reduction.

Biodiversity on Mount Kilimanjaro is not likely to see any severe affects as a result of the melting snow, since very few species of flora or fauna actually survive at higher altitudes. Wildlife that can be found on or around Mount Kilimanjaro are typical African species that thrive in warm climates, so while the occasional lion or elephant has been known to get to heights on the mountain of up to 2800m, their time at such high altitudes is rare and fleeting. The majority of wildlife can be found in the forest ecosystems on Mount Kilimanjaro where there is a lot of biodiversity; rich soils, a wealth of species, and plenty to sustain the creates that live there.

Who knows, if once the snow can no longer be found on the mountain, flora and fauna might make its way up to higher altitudes on the mountain; but what we do know is that this proves just how profound the effects of global climate change can be to established ecosystems.

Image Via: Flickr Use FieldTripp with a Creative Commons License