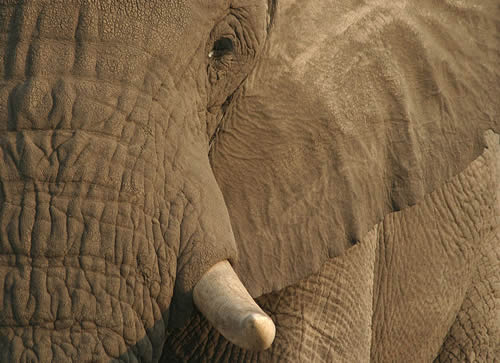 Thanks to the controversial approval of a one-off ivory sale, illegal trade in ivory has been reinvigorated – and 100 elephants a day are being slaughtered.

The Convention on International Trade in Endangered Species (CITES) approved a one-off elephant ivory auction in 2008 of 119 tons (108 tonnes) – representing over 10,000 dead elephants – and this decision is believed to have stimulated the growing illegal ivory market.

The approval of China and Japan as trading partners in the ivory auction remains a questionable move (a huge mistake, many would argue), as both countries are known for being among the world’s largest markets for illegal ivory.

The result? A resurgence in ivory demand and the deaths of 100 elephants a day.

At this rate, wild African elephants will be extinct by 2025.

But China stands alone in the sheer size of its ivory appetite. And now, with more Chinese enjoying rising incomes, the status symbol of ivory has become attainable for the growing number of China’s baofahu – the “suddenly wealthy”.

And, according to the Financial Times’ Shopping Habits of China’s ‘Suddenly Wealthy’, this dangerous combination is having a devastating effect on endangered species – including elephants.

Traditional Chinese tastes, combined with the explosion in wealth during the past decade, have created a rapacious and unsustainable call for the body parts of endangered species. The manufacture of ­traditional delicacies, ornaments and medicinal ingredients has helped to cut swathes through populations of sharks, elephants, seahorses and other species across the world – and that demand is only expected to increase.

CEO of Care for the Wild International, Barbara Maas, explained that the growing Chinese footprint in Africa is disconcerting to conservationists.

With the number of Chinese nationals resident in Africa rising, and poaching on the increase, the frontline between supply and demand for ivory is now perilously close, with a disastrous outcome for elephants.

In fact, a China ivory trade report by the International Fund for Animal Welfare (IFAW) found unwillingness among Chinese citizens to comply with the ivory control system – and a desire for “affordable” ivory.

Rangers on the front lines in elephant range states continue to lose their lives protecting elephants from poaching.

Developing countries continue to bear the brunt of burgeoning Asian markets. By permitting legal trade in ivory, we are only encouraging the laundering of stocks by poachers, thereby increasing illegal hunting activities. The situation is very clear: more ivory in the marketplace equals many more dead elephants – and rangers.

And there is an “uncomfortable link” between the recent influx of Chinese workers in Kenya and the surge in elephant killings.