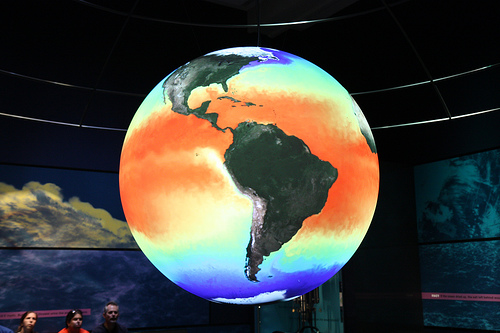 The United Nations (UN) released a report on September 1 that gives their strongest criticism of climate change funding to date. They say that rich, developed nations really need to step it up in the battle to control and reduce climate change. They say that funding should be about 27 times higher than it currently is ($500-600 billion compared to $21 billion annually).

The UN states that it does not “shy away… from insisting that the advanced countries will have to deliver resources and leadership on a much larger scale than has been the case to date.” This is a bold statement and a humungous lead-in to the Copenhagen climate conference in December.

In the press release for the new report — The World Economic and Social Survey 2009: Promoting Development, Saving the Planet — the UN states: “By any measure, the Survey says that the amounts from bilateral and multilateral sources currently promised and expected to be available for meeting the climate challenge in the near term are woefully inadequate.”

The report states that what is needed is “a level of international support and solidarity rarely mustered outside a wartime setting.”

HOW MUCH NEEDS TO BE SPENT?

The UN says that “large upfront investments will need to be made” and the current funding for developing countries from developed countries ($21 billion a year) is grossly inadequate. The UN leaps forward above other current estimates of what is needed and says 1% of World Gross Product ($500-600 billion a year) should be transfered to developing countries. It says that their report “goes against conventional wisdom by suggesting that significant additional investments in mitigation and adaptation need to take place sooner rather than later, to the tune of at least 1 per cent of WGP annually, between $500 billion and $600 billion.” So, the total support needs to increase from about $21 billion to $500-600 billion.

This may sound like a lot. However, if we keep at the same level right now, the costs in the future could be even 20 times higher than that — 20% of WGP. According to the organization: “by continuing in the present business-as-usual scenario, or making only marginal changes, the permanent loss of projected WGP could be as high as 20 per cent.”

The UN says that the changes need to be Big. They refer to what needs to happen as being a “Global New Deal” — like the New Deal in the US from the early 20th century that pulled the country out of the Great Depression but on a truly global level. They say there is “little benefit in ad hoc incremental actions” and the global community “should be just as serious about committing resources on the same scale as was needed to tackle the financial crisis and defeat political extremism.”

It is just not fair for developing countries to have to stop their development at such a lower level than developed countries. They have the right to continue developing to that quality of life and the whole global community should help them. The report states: “The idea of freezing the current level of global inequality over the next half century or more (as the world goes about trying to solve the climate problem) is economically, politically and ethically unacceptable.”

We need to step up efforts to address climate change dramatically. The developed world needs to help the developing world in doing this. It is our ethical responsibility. The price tag to save our world is $500-600 billion a year now, but could be $10,000-12,000 billion if we don’t act now.

For more on this topic, read:
1) The US is Driving Other National Positions Leading into Copenhagen
2) Future of Global Cooperation on Climate Change: From the US to India and Back
3) US-China Memorandum on Climate Change a Positive Sign for Copenhagen Talks
or
4) What is a Global Citizen? Are You One?

Image Credit: Mr. T in DC via flickr under a Creative Commons license