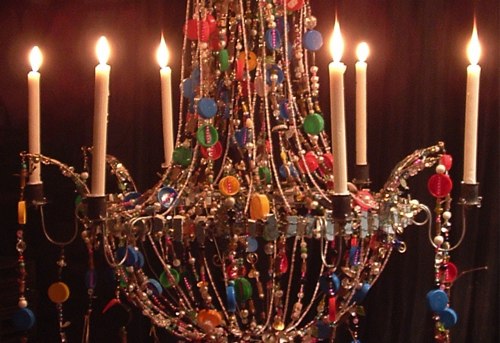 The interior decorator tasked with the redecoration of the Obama’s private quarters in the White House has introduced chandeliers built around waste materials into his proposals. These chandeliers links rural development in South Africa to the White House.

Magpie, a socially conscious art collective, was founded in 1998 by designer Scott Hart and social entrepreneur Shane Petzer. It produces ornate light fittings, home décor and jewelry crafted from, among other things, recycled glass bottles, yoghurt containers, plastic, dog food cans, mosaic, bits of mirror, toys, charms and copper wire.According to Petzer their name was inspired by a reporter who referred to them as the magpies of Observatory (an arty suburb of Cape Town where they lived at the time) because of their habit of incorporating bright and shiny waste in their furnishing.

“We have always loved shiny things, things that catch and play with light – sparkle and throw light into all sorts of directions – that’s the excitement of chandeliers – they are extrapolations of our sparkly ideals of fantasy and ideals.

Our Magpie chandeliers are nests of ideas, borrowings and findings, clashing and complementing, shiny and matt – rather like life – they showcase a picture.”

Their creations were sold through Anthropologie, a high-end chain in the US. They were spotted by Michael Smith, a Los Angeles-based decorator who was contracted to redo the Obama’s quarters. He included two of Magpie’s 2 m (6 1/2 feet) high chandeliers into his work.

Barrydale and the Karoo

Magpie moved to Barrydale soon after their establishment and were joined by painter Sean Daniel and administrator Richard Panaino. Barrydale is a village of 3,500, located 210 km (130 miles) east of Cape Town in the Karoo a large semi desert area of South Africa. Its population increases dramatically each year in the tourist season when visitors are drawn by arts and crafts displays that include textiles, jewelry and African curios.

Two of the Karoo’s rather eccentric artists, the reclusive Helen Martins who created the Owl House and Oupa Lappies who is best known for his ”lighuisies” – lanterns crafted from scrap metal and colourful shards of old glass, influence the work of Magpie.

Many rural villages in the Karoo, are split into physically separated middle class and and poor areas that result from the dormitory townships established under apartheid. Living in these small villages brings people into close day to day contact with the poor and destitute who experience a range of debilitating social problems. Barrydale is no exception and Magpies soon saw opportunities where their skills and expertise could benefit the people of the area.

Magpie’s contribution to development is channeled through the “Rooi Doppies Project” where they provide technical support to community income generation projects, crafters and civil society endeavours that focus on critical social issues, such as HIV/AIDS, Substance Abuse, Recycling and Environmental concerns.

As well as funding the collection of recyclable material for their products they train crafters to produce their own waste based items. Rooi Doppies established a soup kitchen to feed the poor, runs an after school project which encourages children to do their own recycling and supports a craft manufacturing activity from which Magpie buy the output.

The after-school project collects and cleans plastic bottles lying around Barrydale. These are cut to look like flowers, painted with water-based paint, assembled into elaborate balls with a bulb in the middle and sold as funky lighting. The craft project make catchy light bulb covers out of beads, knitted copper wire and fronds of plastic which Magpie buy sell in their studio. The objective of the project is to create skills and independence, in the style of Oom Lappies rather than just creating jobs.

Photograph by Nicky Rehbock, Sean Daniel and Richard Panaino under a free to use license from Media Club South Africa.