Live From the First Day of Outside Lands

Home » Blog » Updates » Live From the First Day of Outside Lands 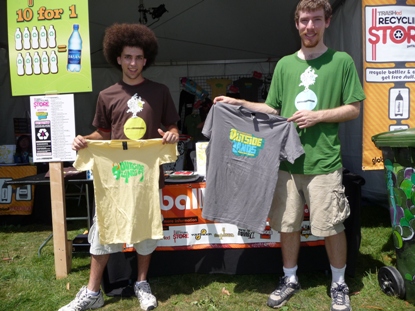 Before the onslaught of crowds hit Golden Gate Park for Pearljam tonight, I, along with other Green minions checked out the Ouside Lands Green scene just as West Indian Girl hit one of the numerous stages.

Don’t say that we didn’t warn you but those who are short on cash should consider the Global Inheritance sponsored recycle booth in the Eco Lands section. They offered a similar booth last year but not many people seemed aware of it. The deal here is that anyone who wants nifty Outside Lands shirt (for free) just needs to bring 75 empty cans or bottles to the booth. For 250 bottles you can snag a pair of Loomstate organic jeans and 150 gets a recycled record vinyl clock. Those not as inspired can get some Fuel TV sunscreen (and boy is sunscreen mandatory today) for just eight bottles.

On the food front, we like the local and/or organic slant on food. The chow lineup includes local faves like El Huarache Loco, Eos Wine Bar, Fated Calf, Hog Island Oyster Co among some of the tasty local purveyors. They even offer fresh organic fruit from local farmers markets. Think anyone will miss the fried corn dogs and dried out, mass market chicken sandwiches? We think not.

The Refillable Water Program marked the most curious thing (so far) that we spotted. Simple enough that people can refill their reusable water containers for $1 with water sourced from the large five gallon bottles. Yes, we people could just go to the park fountains and get the good old Hetch Hechy H20 but no biggie. The curious thing is that at the same booth they sell plastic bottles of Sprite and Coke.  We understand that everyone has to make a buck but if you’re trying to make a point then make it. Don’t go half way.

More Green and Sustainable action from Outside Lands to come.