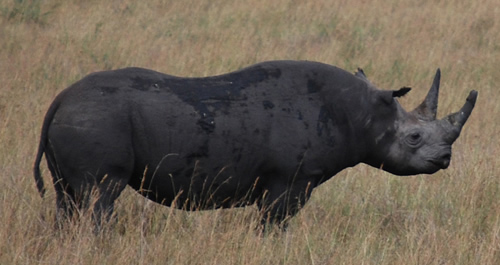 A shocking undercover journey reveals that a poaching cartel known as ‘The Crocodile Gang’, led by Zimbabwe’s Emmerson Mnangagwa, is slaughtering rhinos and elephants to fulfill ‘requests’ for horn and ivory.

Dubbed the Crocodile Gang, this cartel – whose existence can be revealed by the Mail today – is behind the ‘industrial-scale slaughter’ of black rhinos, prompting warnings that the species will be hunted to extinction in the region within two years.

And the “godfather” of the poaching cartel is said to be Emmerson Mnangagwa – known by locals now as “The Crocodile.” Also referred to as “The Butcher of Matabeleland”, he is the architect of Zimbabwe’s terrifying state security apparatus, creator of Zimbabwe’s Central Intelligence Office (CIO) – and rumored to be next in line for president after Mugabe.

Probably risking his life, Andrew Malone, a writer for The UK’s Daily Mail, reports that he went undercover, posing as an overseas buyer of illegal rhino horn to dig deeper into the widespread rhino massacre that stands to wipe out an entire species. What he reveals is an appalling world of cruelty, corruption, death threats – and the consequences suffered by those who have tried to speak out.

Posing as an overseas buyer of illegal rhino horn, I was given an unprecedented insight into the sheer scale of the operation – and the vast sums involved. After making contact with the ivory cartel through an intermediary, we were instructed to drive 400 miles south-west of Harare and telephone a number using a pre-arranged codeword. There, after more elaborate instructions, we were told to drive to a remote location in Matabeleland, near the border with South Africa and Botswana.

Mr. Malone then describes meeting with a man named “Gerald” – who operates with members of Zimbabwe’s Central Intelligence Office (CIO). Gerald has just returned from a “successful” rhino hunt – fulfilling the “order”placed by a Chinese buyer.

The rhino was being killed to order: a Chinese buyer had offered to pay £3,200 per kilo of rhino horn. ‘It wasn’t easy – there is no cover because it’s winter and the animal kept seeing us by the moonlight and running away,’ he told me.

Gerald had sold the horns two days before our meeting. When I told him I would pay an even higher price, his eyes narrowed. He said. ‘I will contact you the next time.’

The case of the disappearing docket

Earlier this month, the involvement of Mnangagwa and Webster Shamu, Zimbabwe’s media and information minister, came into the spotlight when a police officer stopped a Chinese man at roadblock – and was found to be carrying six rhino horns, still bloody.

Unfortunately, the policeman who uncovered the ivory haul has vanished – along with his report. Meanwhile, the Chinese national was released – with his [horns] – and escorted through Harare International Airport to his plane.

The Zim Daily reported the following about the corruption “cover-up”:

… a police docket  against two ZANU PF heavyweights — Emmerson Mnangagwa and Webster Shamu — has vanished from attorney-general Johannes Tomana’s office. And, efforts to give Tomana a copy of the docket has seen the police superintendent who was in charge of the investigations transferred from his posting at Bulawayo Central police station to a rural outpost at Nzvimbo in  Chiweshe.

Davy and Shamu set up HHK safaris, which offers trophy hunting of animals including elephant and lion, to wealthy foreigners. While almost every other white landowner has been driven from his property by Mugabe’s thugs, Davy … has prospered. A friend of Mugabe, he has made an estimated £10 million from his big-game hunting business.

According to the Zimbabwe Times:

Shamu and Davy were associated in HHK Safari Company until it was disclosed that, far from being a partner in a joint venture in the lucrative operation as widely reported, Shamu was merely a front for foreign interests.

65,000 Black Rhinos were alive in Africa as recently as 1970. Now there are only 2,300 total surviving in the wild – and the number is dwindling. Elephant poaching continues to skyrocket.

Earlier this year, Wu Ming Quan, another Chinese ‘ businessman’, was caught with 500kg of ivory at Harare airport. The tusks were spotted on an X-ray machine at the airport. But the X-ray operator was prevented from confronting Quan by three members of Zimbabwe’s secret police. According to undercover wildlife investigators, the Chinese businessman had paid an additional £2,000 for safe passage through the airport. The X-ray operator was arrested and thrown in jail for threatening to bring the crime to light.

Mr. Malone also notes that a ton of ivory was seized in Nairobi two months ago – it was being shipped from Zimbabwe to China.

I wrote about the ivory situation in my post “Kenya Wildlife Service Dismayed at Resurgence in Elephant Poaching“:

Earlier this month, an illegal shipment of elephant tusks and rhino horn was seized at the Jomo Kenyatta Airport. Blood on the ivory and horns confirmed that the elephants and rhinos had recently been killed.. The animal parts were hidden in coffins, and were en route to Laos. Kenya wildlife authorities are confident that the tusks and horn had a final destination of China, where the illegal trade in endangered species parts is well-established.

The Kenya Wildlife Service suspects it is more than a coincidence that a large number of elephant killings have occurred in areas where Chinese crews have recently arrived for massive construction projects.

According to Save the Elephants, the majority of smugglers arrested at Jomo Kenyatta Airport are now Chinese nationals.

The Zululand Observer has now reported the following regarding the poaching of eight white rhinos in Opathe-Emakhoseni Heritage Park (OEHP):

Developments regarding the OEHP incidents have since seen four men and a woman, all of Chinese origin, appear in the Babanango Magistrate’s Court on Tuesday this week, following their arrest inside OEHP near Ulundi. They were found trespassing, as the reserve has been temporary closed to the public, pending the appointment of a new manager for the park. They were not asked to plead to any charges and the case was postponed pending further investigations. Those who appeared are Pingquan Ni (37), Shuiwang Wu (37), Daxin Zhang (42), Xiufu Lin (32) and Meixia Zhu (26). They own businesses in Ulundi.

While on his mission, Mr. Malone had the opportunity to meet the founder of the Zimbabwe Wildlife Task Force, Jonny Rodriguez. There have been many threats made on his life for speaking out.

Jonny Rodriguez, a Zimbabwean former special forces soldier, is one of the few people brave enough to speak out against this government-sponsored slaughter. Founder of the Zimbabwe Wildlife Task Force, a group that works to save endangered species, he has received countless death threats.

There have been reports that the BBC has resumed broadcasting “openly” from Zimbabwe for the first time since 2001. And CNN might even be allowed soon.

In recent years of political and economic turmoil, most Western organizations had been refused government licenses to report from Zimbabwe. Correspondents from the BBC and other media have acknowledged reporting clandestinely from Zimbabwe, at times entering on tourist visas.

These crimes thrive in secret, and will continue as long as there is no speaking out against them.

One of the first steps, then, is to begin talking about what is going on: Help by giving a voice to the rhinos and elephants who are unable to speak for themselves.

Andrew Malone has taken a brave step. Here’s to taking more steps like his.