Is Decline in India’s Vulture Population Linked to Spread of Rabies in Humans?

Home » Blog » Animals » Is Decline in India’s Vulture Population Linked to Spread of Rabies in Humans? 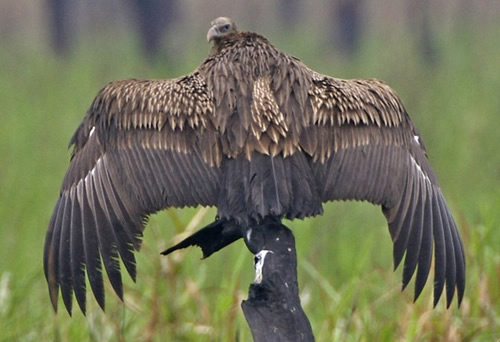 India’s ecosystem has been dramatically disrupted by the plummeting population of its critically endangered vultures: Stray dogs have now become one of the top scavengers, and they are reportedly spreading rabies to humans at an alarming rate.

The new availability of extra food left behind by the dwindling number of vultures (from 40 million to just 60,000 vultures, due to poisoning) is a having a catastrophic effect on India’s ecosystem. It has led to a population explosion in stray dogs, who are reportedly “hunting in packs, thus posing a threat to humans as well as wildlife.”

Other scavengers have moved in and taken advantage of the newly available food. But these interlopers – stray dogs and rats, among others – aren’t as effective as the vultures. What’s more, they bring with them disease … As the number of vultures declines, the number of feral dogs in India has risen dramatically, thanks to the extra food available … Diseases such as rabies are on the increase: India now has the highest rate of human rabies in the world, partly due to the increase in feral dogs.

In fact, the rabies problem is so widespread that India has launched a plan to sterilize over 8 million dogs over the next ten years.

More human health issues related to the lack of vultures

Unlike vultures, who pick the carcass of a dead cow clean in an hour and leave nothing but a pile of bones drying in the sun, dogs are much less efficient at carcass disposal.

When dogs go at a corpse, they don’t remove all the flesh, so what you’ve got are half-eaten carcasses rotting out in the open.

When vultures are no longer around, carcasses will decay and lead to the outbreak of TB, anthrax and foot-and-mouth disease.

And because vultures have been relied upon for so long to keep the environment clean of corpses, there is now a problem with rotting meat left behind and thus the possibility of water contamination.

Farmers – who were previously unaccustomed to dealing with carcasses – have not been quick to adapt to the change. They have tried to burn or bury the remains, but they lack the equipment, money or experience to get rid of the bodies efficiently.

For India’s Parsis who practice Zoroastrianism, their faith prevents them from burying, burning or submerging bodies, due to hygienic concerns.

For centuries they have relied on the vultures to dispose of their dead, leaving bodies out in the open to be consumed by the birds … An entire human carcass can be consumed to the bone within a matter of hours by a large group of vultures. But now that their numbers are dwindling, half-eaten bodies can be left for days, leaving the community susceptible to disease.

Note: This post was a follow up of one I wrote earlier today about the dramatic decrease in India’s vulture population as result of poisoning by the drug diclofenac.