Between June 20th and 28th, folks all over the world will be holding vegan bake sales to raise awareness about awesome vegan food and raise money for the causes of their choice! 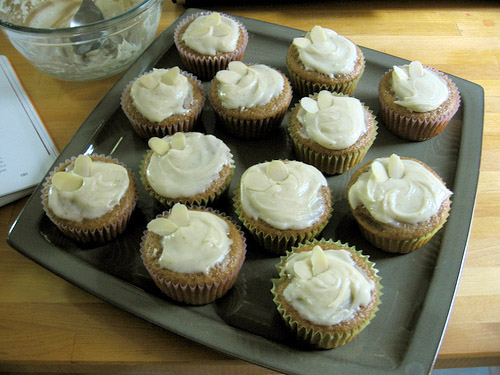 Meat production has gotten a lot of coverage for its impact on the environment lately, but what about all those dairy cows? Whether they’re slaughtered for meat or milked, we’re still talking cows and all the impacts that go along with raising them. The Worldwide Vegan Bake Sale organizers strongly feel that veganism is better for the planet and its inhabitants. Check out their intro to veganism to learn about the story behind animal products like eggs and dairy.

From New Zealand to Nigeria to New York, groups around the world are holding vegan bake sales during the last two weekends of this month. They’re encouraging both vegan and non-vegan groups to hold events, as long as the baked goods at the sale are completely vegan. To help facilitate, they’ve set up a page of vegan baking tips and vegan recipe resource guide. Each participating group is working to benefit a cause that matters to them. Check out some of the participating groups:

Atlanta, Georgia
I’d be remiss if I didn’t brag on my town first thing! Local business Cosmo’s Vegan Shoppe is teaming up with Abracapocus for a sale on June 21st from noon to 4pm at Criminal Records. All proceeds go to benefit Project CatSnip, a local organization that offers low-priced spay and neuter services. Check out the gorgeous flier that local artist Steph Timms put together for the event: 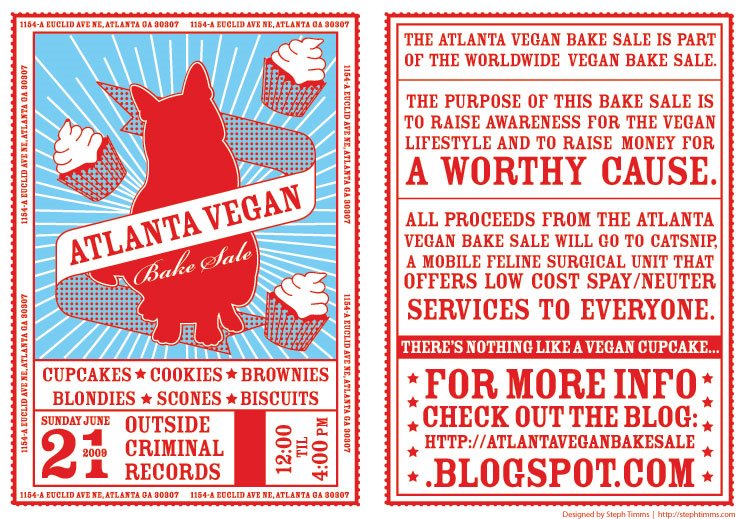 Wichita, Kansas
I just love seeing non-vegan groups getting involved and spreading the word. On the same day as the sale in Atlanta, the First Unitarian Universalist Church of Wichita is also holding a bake sale! This event features a screening of the documentary Meat the Truth at 1pm.

London, England
The Vegan Mentor is organizing a sale on Saturday, June 20th from 11am-5pm. Proceeds are going to benefit FRIEND Farmed Animal Rescue. They’ve got a fantastical list of baked goods, including truffles, coffee cake, and peanut butter cups!

Guleph, Ontario
Downtown Guleph’s bake sale is benefiting Ruby Ranch Pig Sanctuary. The event is on June 27th from 8am-2pm. As a special bonus, the folks running the pig sanctuary are planning to attend and might even bring one of the piggies out to say hello!

Tampa, Florida
The Tampa Vegan Examiner is organizing two bake sales: one during each weekend! On June 20th and June 27th from 9am-1pm, locals can pick up baked goods at the Ybor City Saturday Market. Check out the Tampa Vegan Bake Sale website for deets!

Participation doesn’t end there! With 70+ bake sales around the globe, there are plenty of events to choose from. For more information, check out the Worldwide Vegan Bake Sale website. You can also follow them on Twitter or become a fan on Facebook!