Georgia and Alabama are now storing more than 1000 tons of the fly ash that leaked from a Tennessee coal fired power plant in December. 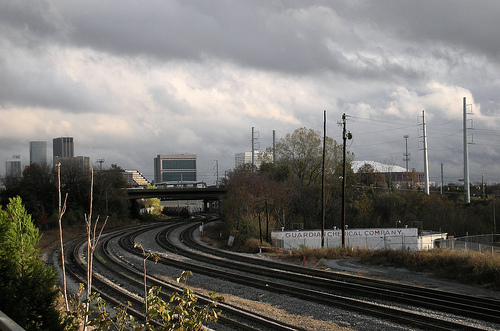 The spill, which dumped over 5.4 million cubic yards of toxic sludge in the area around the Kingston coal plant, was over 120 times larger than the Exxon Valdez. It destroyed homes in the area and contaminated local water supplies. Cleanup is still underway from the disaster six months later.

So why is the Tennessee Valley Authority (TVA) shipping tons of this toxic substance from Tennessee to Georgia and Alabama?

There are two loads of the ash headed out of Tennessee: one to Taylor County in Georgia and the other to Perry County, Alabama. They’re using area landfills as testing sites for transporting and disposing of this dangerous substance, experimenting with different sorts of rail cars and storage.

The idea is to test for the safest way to dispose of the ash. TVA authorities are saying that they’re taking safety into account, but according to the Chattanooga Times Free Press:

The ash waste was stored in what Tennessee classifies as a Class II or industrial waste landfill behind TVA’s Kingston Steam plant near Harriman […] the spilled ash now will be taken to Class I municipal garbage landfills.

Georgia and Alabama solid waste officials confirmed [this] Friday afternoon, but they said their landfills are double-lined with both clay and a synthetic barrier material.

They’re sending the ash from an industrial dump site to nonhazardous landfills. It just feels like the TVA still isn’t taking the risks from fly ash seriously, barrier material or not. There was barrier material at Kingston, and we saw what happened there.

Coal ash is a highly toxic by-product of coal fired power plants. It contains contaminants like lead and arsenic, and according to Scientific American, is more radioactive than nuclear waste. Kingston-area residents have filed a $5 million class action lawsuit against the TVA for damages from the December spill.