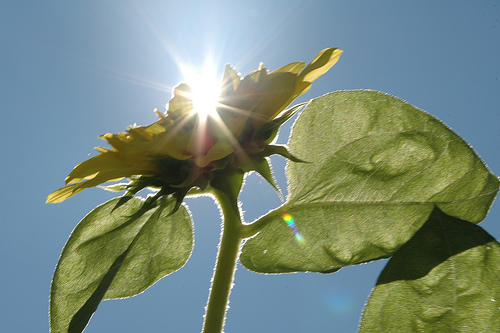 The first lot, at the intersection of Jackson Avenue and North Johnson Street in Central City, is all cleared, tilled, and ready to be covered in sunflowers! This is the first of five lots involved in the Project Sprout pilot program. The plan is to collect the seeds and turn them into biofuel, but the biofuel isn’t the point of this program, said Green Coast president Will Bradshaw. He sees this as an opportunity revive some of the land that’s been left vacant since Hurricane Katrina. Bradshaw says:

Imagine a neighborhood in New Orleans where you’ve got 40 or 50 percent of the lots that are vacant, houses are blighted and the standard vision of the neighborhood is a place where people dump their trash. In 90 days you transform that to a place that’s growing flowers and creating biofuels, which is pretty powerful.

That’s quite a vision! Limitless Vistas, a nonprofit specializing in environmental workforce training, has been working to get the lots ready for planting. I’m interested to see where this project goes! It sounds like it has great potential to beautify these abandoned lots and bring green jobs to the New Orleans community!

GTECH already has several projects underway in the Pittsburgh area. The company has focused on planting sunflowers and canola plants because not only can you turn the seeds into biofuel, the plants actually absorb common urban soil contaminates, such as lead.