A jaguar recently swam onto an island located in the Panama Canal. It then triggered a hidden camera that took its picture. This is the first time a jaguar has been photographed in the 86 year history of 3,707 acre Barro Colorado Island– one of the most well-researched tropical ecosystems in the world. 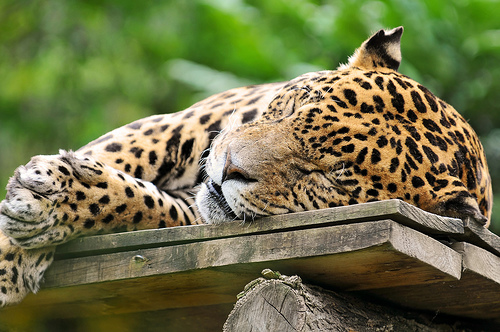 The hidden camera had been set up as part of an annual effort to inventory mammals that live on Barro Colorado Island. According to the researchers who set up the cameras, the finding is exciting given that jaguars are already considered rare throughout the entire country of Panama (see photo below).

So just how far did the jaguar have to swim?

Probably not that far–  it most likely traveled about the distance of two football fields. But before you decide that’s a small amount, have you asked yourself if you could swim that far?

Barro Colorado Island is only about 200 yards from the mainland. It was created in 1913 when the Chagres River was damned to create Gatun Lake, a central area in the Panama Canal. The damning of the river did not flood the entire height of the rainforest that was there before, and the higher ground essentially became Barro Colorado Island.

Since 1923, the Smithsonian Tropical Research Institute and its predecessors have conducted extensive ecological research on the island, making it one of the best studied ecosystems throughout the entirety of the tropics. Today the field research station operated by Smithsonian hosts about 200 scientists each year. The ecosystem they study has remained fairly intact from human intervention since the initial creation of the island.

Recording a jaguar on Barro Colorado is an interesting wrinkle to our understanding of the behavior and movement of the large cat species (photo above). The jaguar has become an endangered species because of hunting, habitat loss, and habitat fragmentation. In the relatively short time since their application, hidden “camera traps” have been a highly successful tool for conservation efforts of rare animals like jaguars. While it has been known that jaguars can swim, it is perhaps more fascinating to discover one roaming this area of Panama. With this kind of specific information, wildlife corridors that provide appropriate space for jaguar movement can be better designed.

It’s almost impossible to create a specific conservation plan for an elusive animal whose movement patterns and whereabouts are not clear beyond generalizations. But with the aid of camera traps, jaguars have been studied recently with much greater success in countries like Peru and Ecuador. Earlier this year a camera trap photographed the first jaguar to have been seen in central Mexico since 1900, bolstering hopes that the jaguar’s numbers are recovering in that part of its range.