Are We on the Eve of “Creative Destruction”?

Home » Blog » Economy » Are We on the Eve of “Creative Destruction”?

Last Wednesday, as I was riding my bicycle down Third Street to the farmer’s market, my thoughts turned to the economist Jospeh Schumpeter and  his seminal book “Capitalism, Socialism and Democracy“. Streams of loud cars and trucks blared past me on the road, some of the vehicles nearly grazing me as oblivious drivers chattered on cell phones. As I continued pedaling down the street, images of organic daikon and Schumpeter’s theory of “Creative Destruction” swirled around in my brain. 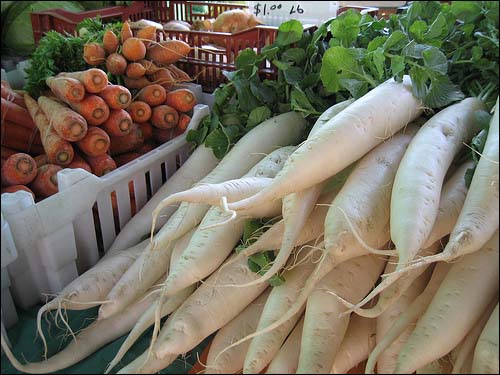 The seasonal weekly farmer’s market at UCSF Mission Bay will be held Wednesdays, from April 22 to November 25, 2009

The concept of “Creative Destruction” describes a process in which new innovation and entrepreneurship are constantly reforming economic systems and commerce. Old established enterprises are destroyed, and new companies sprout up in their place. For example, Polaroid was once a very innovative business that helped to redefine the photography industry, but has now been put out of business by the explosion of digital cameras. A plethora of historical, environmental and social conditions are constantly influencing which companies thrive and which will become sickly and fail.

“The opening up of new markets, foreign or domestic, and the organizational development from the craft shop to such concerns as U.S. Steel, illustrate the same process of industrial mutation…that incessantly revolutionizes the economic structure from within, incessantly destroying the old one, incessantly creating a new one. This process of Creative Destruction is the essential fact about capitalism.”

In the 20th century the rise of the automobile put most blacksmiths out of work. Subsequently, in our current flailing economy many car companies are now helplessly floundering, hemorrhaging money faster  than a rusted oil pan gushes petroleum; while other industries, like bicycle and seed companies, are seeing huge increases in business. The structure of our economy, which commodities are needed, where and how they are produced, is constantly evolving.

Schumpeter also argues that sustained long-term economic growth is not really viable, because resources are limited and new ideas are constantly reshaping how business and commerce function; essentially, that if capitalism is a continued success, it will eventually destroy itself. And though Schumpeter’s book and ideas were written over sixty-seven years ago, they still remain incredibly relevant today. 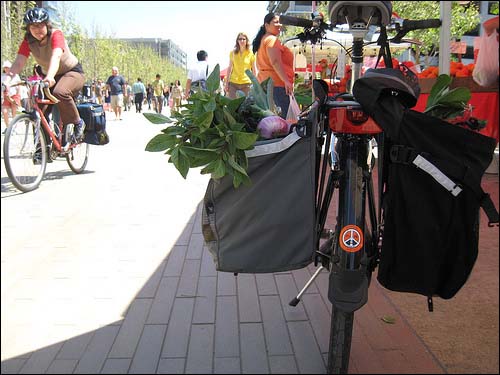 Perhaps, in a sense, it is a very good thing that our nation’s economy is going down in flames, so that an improved redesigned system can rise from the ashes of the old, like a phoenix reborn. Hopefully the old established industries that have become bloated, ineffective and irrelevant will wither, while other innovative progressive locally-based companies will rise up to take their place.

I was thinking about all of these possibilities as I purchased some whole wheat pita bread that had been made a few miles away, while I pushed my bicycle through the crowded bustling market. Scores of people were strolling about and buying locally grown seasonal produce, as well as just enjoying the beautiful sunny afternoon. 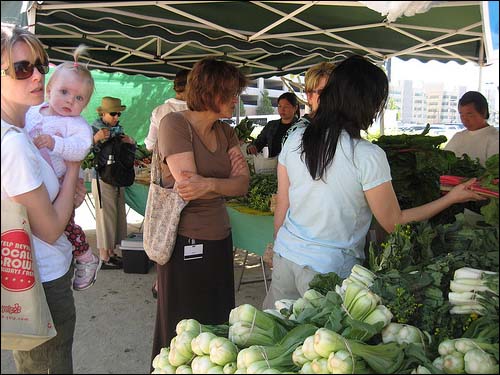 I bought some organic rainbow chard and contemplated our country’s massive failing behemoth banks and the rise of small locally-based economies. I thought about how much better my local credit union cooperative is, as compared to my former evil profit-driven mega-bank, and about how pleasant it was to ride my bike to the local weekly farmer’s market, as opposed to driving a polluting car for miles to some corporate chain supermarket to buy blueberries shipped from New Zealand.

As a nation we must now reject the excessive consumption of our past and embrace a new simpler way of living. Our planet’s resources are finite, and they are in rapid decline. Perhaps “Creative Destruction” can help us to create a better designed commerce system, with increased decentralized local production and a network of small locally-based interdependent economies of scale that are not only viable, but also actually sustainable? 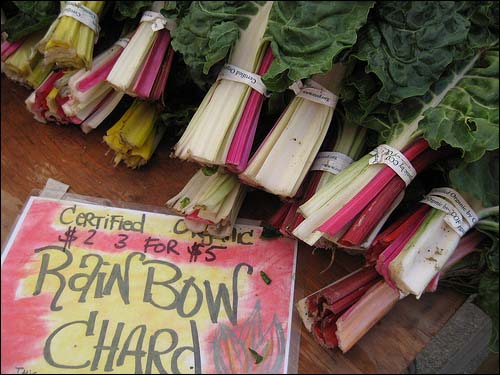 This delicious organic rainbow chard is from Tomatero Farm in Watsonville, California.
Like us on facebook
Address: