The Yangtze Soft-Shell Turtle, or Swinhoe’s Turtle, is the rarest animal in the world. The survival of the species hangs entirely on the tender shell of its only known living female, which is set to mate this May. 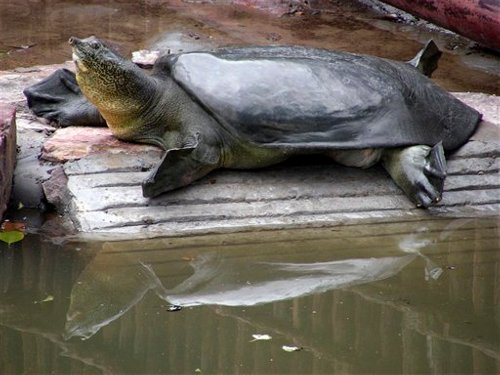 Scientists are hoping that Spring fever is still in the air for the 80-year-old turtle and her 100-year-old male companion, who together make up the last two captive specimens on the planet. The geriatric couple was united last year in an attempt to breed the pair, but none of the fertilized eggs were able to hatch, most likely due to a calcium deficiency in her diet.

If the elderly turtles don’t have a successful mating this year, it may spell the end of a species.

The mating is set to occur at the Suzhou Zoo in China, where the female was moved to last year from the Changsha Zoo after the discovery that she was the last living female of her kind. Remarkably, she had gone without notice there for over a half century before being “rediscovered”. The pairing did not come without significant danger to her, not only because of the 600 miles she had to be transported, but because the male she was to breed with had already killed a previous mate.

Such aggression is not uncommon for the species, and the risk was accentuated since it was unclear how long it had been since either individual had bred– or in her case, even seen– another member of the same species. Though luckily, the two lovesick turtles were immediately lovestruck, and the pairing was a success.

That’s good news, but despite generating 50 fertilized eggs last year, none of them survived. After half a century of going unidentified, the female likely had not been given a proper diet. Of course, her old age was also a concern. Though after a year of being given a calcium-rich diet, scientists are hopeful that this year’s mating will be more fruitful.

Yangtze Soft-Shell Turtles are the largest freshwater turtles in the world, and it would be tragic to make that honorary distinction in the past tense if they were to go extinct. The species had previously been best known to inhabit the Yangtze River and Lake Taihu. However, since modern development of the Yangtze in China, that river system has steadfastly become one of the most polluted in the world, and the turtles were quickly eradicated– poisoned– from their home.

Because it’s possible for the female to lay as many as 100 fertilized eggs a year, the species’ numbers have a chance to jump if this mating is a success. Although, even with this glimmer of hope, scientists caution that the turtles’ future is still deeply uncertain. There are only a couple other specimens of the species known to exist, as well as a few unconfirmed sightings, but all of them are male. Those other individuals have been discovered in lakes within Vietnam, so the pair at the Suzhou Zoo are likely the last living specimens within China.

Any hope for further undiscovered populations of the turtle would be completely destroyed if current plans to build 12 dams along the Red River in China are enacted, which would flood the last of the turtle’s habitat and forever change the ecosystem of lower Vietnam.

The pair at the Suzhou Zoo currently occupy adjacent ponds connected via a blocked underwater doorway. The weight placed upon them is unmeasurable. But when that doorway is opened this May, the two oblivious turtles, by simply engaging in what seems natural to them, could ominously become the last two of their species to feel the touch of another.