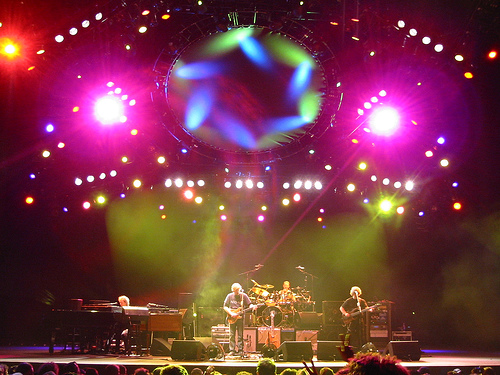 OK, I’ll admit it. On top of being a composting, rainwater harvesting, organic gardening hippie, I am also a huge Phish fan. You can imagine my delight when I got this in my email:

In an effort to help fans reduce their carbon footprint, Phish and Reverb have created a Rideshare Program to help drivers and riders connect with each other to carpool to the upcoming Hampton Coliseum shows. Please visit http://www.pickuppal.com/pup/erp/Phish for more information and to find the shows that you may be driving to or need a ride to.

Phish isn’t the only band getting in on this action! Reverb is working with bands from tons of genres to help green their tours. Bands including Maroon Five, Fallout Boy, and the Beastie Boys have worked with Reverb. The company got its roots from Bonnie Raitt’s successful “Green Highway,” which accompanied her 2005-2006 tour. A non-profit founded by environmentalist Lauren Sullivan and her musician husband, Guster guitarist/vocalist Adam Gardner, the company’s goal is to “educate and engage musicians and their fans to promote environmental sustainability.”

The company is also the brains behind the 2009 Campus Consciousness Tour, a combination music tour and environmental awareness campaign. This is the tour’s fourth year, and Reverb co-founder Adam Gardner’s band Guster is headlining! It looks like they haven’t announced the 2009 lineup yet, but you can check out this video about the event:

It’s inspiring to hear musicians getting excited about lowering their impacts, collecting canned food, and making this show about something even more than themselves! Phish just announced their partnership with Reverb and Pickup Pal this morning, and I’ve been getting a kick out of watching the potential emissions savings on the right tick higher and higher since the email went out.