Last night, Scott Kellogg from the Rhizome Collective spoke at Charis Books in Little Five Points. He talked about permaculture and taking back the word sustainability. 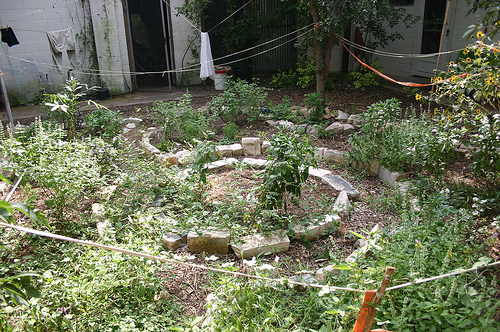 Marketers and large corporations have co-opted the word sustainability to sell products. It’s come to mean expensive bamboo counter tops and organic cotton bedding. We need to take back that word to its original meaning. Sustainability is living within your means. It’s closing the waste cycle and finding ways to turn trash into something that’s usable again. Last night, Kellogg talked about some ways that Rhizome is accomplishing these things. Ways that we can, too!

A Post-Petroleum Economy
He used the phrase “a post-petroleum economy” a lot. Our lives depend on petroleum in ways that folks don’t always think of. Of course, it’s used to power our cars, build our roads, and transport our food. But it’s even more ingrained in the agricultural process than that. Petroleum is a key ingredient in fertilizer for the large-scale agriculture that feeds most of the folks in the U.S. There’s such an easy way to simultaneously make wonderful fertilizer and help keep some waste out of the landfills: compost those food scraps! On top of a fantastic DIY way to make your own, petroleum free fertilizer, it keeps all of that organic matter out of our landfills. When that stuff breaks down in a landfill environment, it creates methane gas, which is far more brutal a greenhouse gas than CO2.

He just could not say enough good things about composting. There are a couple of ways you can go about it. You can have an outdoor bin, where you toss in food scraps and mix them with brown matter (like dry leaves or mulch) and let it break down into good, nutritious dirt for your food garden. Even better, though, and something accessible to home owners and apartment dwellers alike is vermicomposting. He recommended a particular worm called the red wiggler. These little fellas will eat up all of your food scraps and turn them into dirt! You can put their castings onto houseplants or a garden. Anywhere that you’d use traditional fertilizers!

Food and water are factors that unite us all. We all need to eat and drink water to live. Kellogg suggested that these issues are a great way to jump start community organization. In the post petroleum economy, we’re going to need to work together towards things like food and water security. He had all sorts of tips for intensive food production and rainwater harvesting in cities.

The most interesting food production topic he mentioned was aquaculture. Water environments produce more calories per acre than most farms! And it’s so easy to get your own pond going! Just round up an old kiddie pool or discarded bathtub, fill that sucker up with water, and drop in some fish and plants. If you have the right balance of plants and fish, they should help control pests like mosquitoes.

He talked about fish as incredibly efficient converters of protein. It takes about 2 pounds of feed to produce a pound of fish, versus about ten pounds for a pound of cow. There are also some wonderful aquatic, edible plants! I had no idea that you could eat pretty much all of the parts of the cat tail. He said that the roots of that plant are starchy – sort of like a potato! He also talked about duck weed, which grows like cray. Many pond owners consider it a pest, but it’s a great source of protein. You can eat it, and you can feed it to your fish, too! The great part about this system is that the plants feed the fish, the fish waste feeds the plants, and it all provides sources of calories for you in a closed system.

As far as rainwater harvesting, the system he described sounds a lot like the one we’ve got at my house! If you can’t afford to purchase a barrel, no problem! Ask around at restaurants for a food grade barrel, saw off the top, and use a bungee cord to cover it with about a four foot square of window screen. When you need water, just lift off the top and dunk in a bucket. Ta da!

It’s All About Scale
Kellogg is a big advocate of doing things yourself, on an individual or small group scale. Things like biofuels get a bad rap, but it’s all about scale. If one person or a small group is growing crops and making the fuel, it can definitely be a good thing. Journey to Forever has a great tutorial on making biodiesel, if you’re interested.

He talked about energy independence on small scale, as well. His examples were things like passive solar and wind power. The passive solar example that stuck with me was his method for heating shower water. If you strip all the outer layers off of a regular water heater, you’re left with a big, black drum. You leave that drum out in the sun, and the water inside get really, really hot. Kellogg’s group took it a step further, though. They stuck the whole thing into an old refrigerator, covering the top with greenhouse film. The fridge keeps the heat you collected during the day trapped inside. He said you can have a hot shower the next morning with heat you collected the previous day! They just plumbed the heater/fridge system to feed into a shower.

I could really just go on and on about the amazing projects and ideas that he talked about. If you want to read more about Scott Kellogg and the Rhizome Collective, check out their website! You can also check out the book he co-authored with Stacy Pettigrew: Toolbox for Sustainable City Living. If you want to do some research on your own, try Googling “bioremediation.” Trust me, you’ll be glad you did!