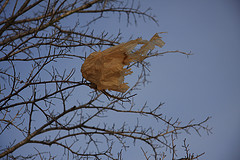 Michigan’s Genesee County Commissioner Archie Bailey wants to ban plastic bags from county stores. If the ban goes through Genesee County will be the first area in Michigan to create such a ban.

The commissioner is having the county’s attorneys research laws and has them busy trying to figure out if the Commissioner’s office has the power to enforce a plastic bag ban.

I certainly hope they do. It would be one more step for Flint and the surrounding areas to become green.

There are many people for and against the ban. Some claim it would be burdensome for stores and an incovenience for shoppers.

Sorry, what about the burden and inconvenience placed on the planet. According to www.natural-environment.com over 60 million barrels of oil are used every year to create plastic bags and between 500 billion and 1 trillion plastic bags are used every year worldwide. And the majority of those bags end up in landfills or floating around the environment.

Several cities around the US have talked about or already adopted a bag ban including San Francisco, CA. China has even adopted a plastic bag ban…China!

I think we can go a little greener in Michigan and ditch the bags. It would help (read force) people to not forget their reusable totes all the time and maybe the ones who do remember them would quit getting dirty looks from cashiers and baggers.

I personally like shopping at Aldi, they may not be big on the organic and other green items but I don’t get nasty looks for bringing my own bags and best of all I can bag my own groceries which I prefer to do anyway. I have issues with shampoo and lettuce being put in the same bag.

Maybe if the ban goes through stores will all be bag your own like Aldi. Works for me.

I’m all for the ban on plastic bags.