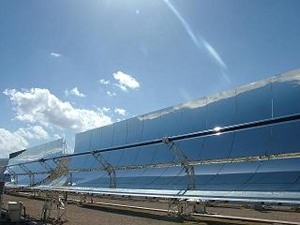 The Shiraz solar power plant boasts a modest 250 KW energy production capacity. It’s a solar thermal plant that uses parabolic mirrored troughs to gather sunlight. The mirrors focus the sunlight in an intense ray on a tube that runs the length of the array of mirrors. Inside the tube, a liquid insulated by a vacuum transfers the heat of the mirrors to a traditional generator, where it’s used to produce steam and generate electricity.

Placing an economic value on renewable resources makes sunny Iran rich in solar energy potential. Iran took its first step toward the large scale realization of that potential this week with the inauguration of its first solar energy plant. The plant was constructed with domestic materials and labour in Shiraz, the Fars province.

The Iran Daily reports that Iranian energy minister Parviz Fattah sees the Shiraz plant as a first step in Iran’s commitment to solar energy technology, which will increase in Iran along with greater government investment.

English information about the Shiraz plant is hard to come by, but more photos of the plant and information in Farsi is available via the Renewable Energy Organization of Iran. Another source, an article in the Tehran Times (no longer available in the paper’s archives, but republished here by a reader) suggests that the completion of the solar plant was several years behind schedule, having been initially slated for the Iranian year 1383 rather than the current year 1387.

Regardless, kudos to Iran on their first solar power plant.