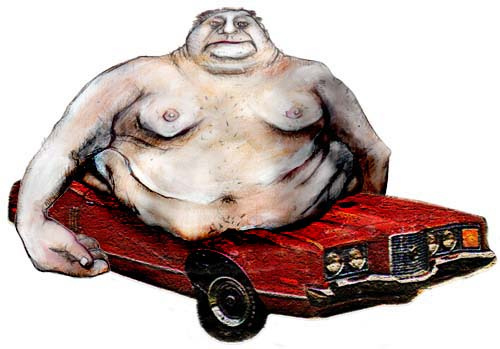 A recent study published in the Journal of Physical Activity and Health found a strong correlational link between “active transportation” (defined as the percentage of trips taken by walking, bicycling, and public transit) and obesity rates in seventeen industrialized nations.  It appears that the more we sit on our butts and drive automobiles, the fatter we all become.

David Bassett of the University of Texas and John Pucher of Rutgers University present their findings in Walking, Cycling and Obesity Rates in Europe, North America and Australia; they conclude that:

Nowhere is this more apparent than in the United States, where less than 12% of the population walks, rides a bike or takes mass transit, and one in three of us is obese.

Compare those rates to other countries in the study:

Overall the study found that Europeans walk three times as far and cycle five times as much as  most North Americans. Europeans walk an average of 237 miles each year and bike another 116, while their American counterparts only walk 87 miles and bike a mere 24. The extra exercise means that Europeans burn 5 to 9 pounds more than Americans do each year. Looking at it another way, the Swiss take an average of 9,700 steps each day, compared to 7,200 for the Japanese and 5,900 here in the United States.

The study did not factor in differences in diet and other cultural variables, but the evidence is fairly convincing nonetheless. As Americans we are not as physically active as people in other countries; we rely too heavily on passive transportation like polluting automobiles. It is time that we reevaluate how we get around and start thinking with our feet. Walk to the store instead of driving. Leave your car at home and hop on a train. Get off of your ass and onto a bicycle; both your body and the environment will thank you for it.

Pedestrians, bicyclists and dogs enjoy a car-free Market Street in San Francisco.
Like us on facebook
Address: