The Carrotmob Gears Up to Green Brooklyn

Home » Blog » Updates » The Carrotmob Gears Up to Green Brooklyn 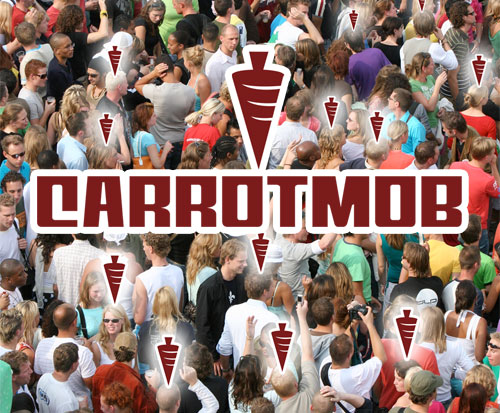 A Park Slope hardware store has pledged to spend 22% of Sunday’s revenue to make their store more energy efficient.

They have not made this pledge because of a mandate, a threat of punishment or an altrusitic love of the environment. Tarzian Hardware wants to make a direct profit.

This is because the Carrotmob is arriving in New York City. Started by Brent Schulkin in San Francisco, Carrotmob is a reverse boycott where similar businesses compete to see who will go the furthest to green themselves up. The winner is rewarded with a “mob”-hundreds of customers who arrive on the same day to buy up the store in order to support greener business.

By using a carrot instead of a stick, businesses don’t have to suffer financially in order to do the right thing.  In just a few hours, the first Carrotmob in San Francisco brought in $9400 to a local liquor store, more than tripling their average daily revenue. The liquor store was able to make a profit over an average day even after paying for energy refurbishments.

Though the line will be long, the New York City Carrotmob is all set to be a fun holiday party featuring live music. 22 cents of every dollar we spend at Tarzian Hardware on Sunday will go toward energy improvements, so head over to 193 7th Avenue between 12-3pm on Sunday and join the Mob! Get what you need, or donate your purchases to Materials For The Arts.