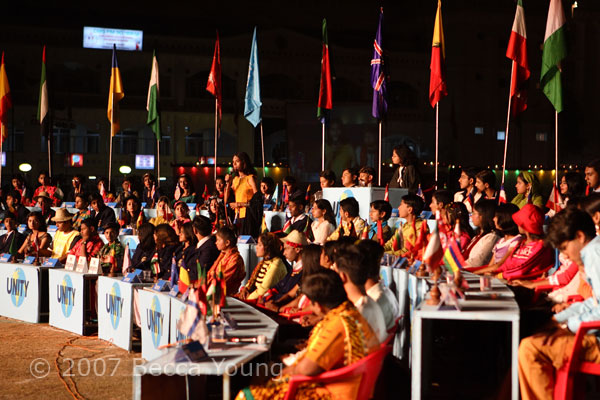 This week, the City Montessori School (CMS) in Lucknow, India will do one of the things it does remarkably well: host a global gathering of grand and hardly fathomable proportions, given it is a primary educational institution. Dec. 12-15, CMS is simultaneously holding its 9th International Conference of Chief Justices of the World, and its 5th Global Symposium: “Awakening Planetary Consciousness.”

For a bit of context, CMS is the largest city school in the world, with approximately 33,000 students (up through high school) attending day classes at 20 branches across the city of Lucknow. (That number, among others, have been recognized in the Guinness Book of World Records.)

The school received the UNESCO Prize for Peace Education in 2002, and has been honored with numerous other awards and designations, such as the Nuclear-Free Future Award, for its focus on peace in an international society.

I attended one of these gatherings in 2007, as a journalist accompanying my photojournalist wife. I dare say there is nothing like it in the world. Chief Justices did come from numerous nations around the world, as did a former president of Mauritius and other such high-level dignitaries. (The United States’ chief justices continue to sidestep invitations.)

As a former attendee, CMS emailed me an invitation to this year’s syposium. The purpose of it, as stated in my invitation:

This International gathering, in the first instance, is to strengthen cooperation among the civil society to unite their efforts in world interest and to act and achieve our common goals by:

2) Creating a widespread awareness about issues like scarcity of safe drinking water, reform of governmental and corporate structures, more equitable distribution of resources, development of renewable energy programs and encourage dialogue to replace international conflict for achieving a breakthrough by creating a sustainable future.

Maybe the greatest aspect of all of this is that we’re not talking about an international event that merely invades the school’s property, pushing kids out for the duration of the conference. The students at CMS, from small to tall, are part of planning and executing these important symposiums — all 30,000-plus of them. 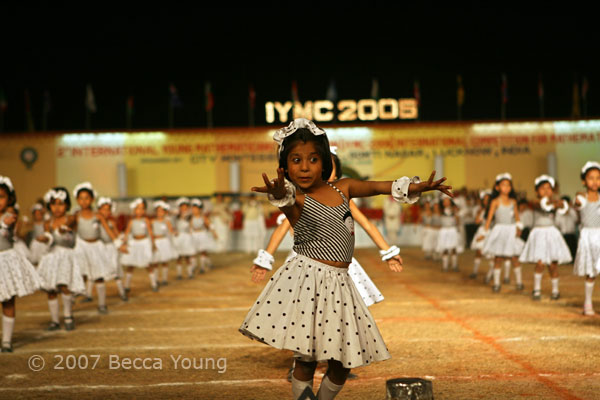 Students put on massive — thousands of kids huge — choreographed performances for the visitors. They give speeches and presentations. They attend the workshops and participate. They stop professors and dignitaries to ask sincere and intelligent questions for which they truly care to have intelligent and sincere answers about what they can do to better the world.

For future reference, for anyone who might consider attending, or even presenting, at a future symposium at CMS, know that the school provides lodging and meals, and there is no fee for attendance.

The goal of these events is as pure as it is large. Jagdish Gandhi, the founder of the school, and the faculty set high expectations of these children and the students respond. They — and CMS at large — are a brilliant example of high achievement and inspired education, and the world would do well to notice them and join the will for peaceful, international progress.