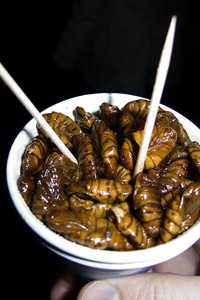 According to legend, 5,000 years ago Chinese Empress Xi Ling-Shi discovered silk when a silkworm cocoon fell into her hot cup of tea. She unraveled the strange cocoon and, wrapping the thread around her finger, soon realized what an exquisite cloth it would make. Thus the history of one of the world’s most coveted fabrics began.

If this is true, the silkworm that haplessly fell into the empress’ cup on that fateful day met a fate very similar to that of modern day silkworms. When they exit the cocoon after metamorphosis, silkmoths must bore a hole through the cocoon wall, which ruins the precious thread. Therefore, silk factories drop the cocoons in hot water before the moth can leave. This unravels the thread well, but it boils down to bad news for the silkworms.

Still, it’s the fate of almost every silkworm in the world today. Due to thousands of years of selective breeding, the silkworms we know today are no longer suited to survive in the wild. The entire species’ population exists only in silk factories and in the cardboard boxes of school children. So, except for the fortunate few 3rd-grade bookworms, virtually every silkworm will meet the cooking pot. That raises the question: what do you do with so many boiled silkworms?

This is food week on EcoWorldly, and I think you can tell where I’m going. In many silk-producing countries, there’s a very simple answer. Eat the worm.

When I was a kid, I had my own box of long, silvery silkworms. I’d sometimes reach into the box to run my finger over one of them. The feeling of their velvety, pulpous skin remains with me to this day as a palpable memory of childhood. Those memories came racing back to me when I ate my first silkworm one day this year, standing by the tourist entrance to an ancient palace in Seoul, South Korea.

In China and Vietnam, silkworms are fried; in Korea, silkworms (peondegi), are seasoned and boiled. Large cauldrons of boiling, brown silkworm pupae are not an uncommon sight on streets and in outdoor markets in South Korea. The odor of the steam rising from one of these pots is so distinctive that if you ever smell it, I guarantee you’ll never forget it. A paper cup full of peondegi is around a dollar, making silkworms an easy, cheap snack. And, even though the younger generations are sometimes shy about admitting it to foreigners, boiled silkworms are nevertheless a popular snack for all ages.

Silkworms have dropped (or crawled) their way into my diet as well. Boiled silkworms have a pungent, almost bitter smell and a similar taste. When you bite down on them (brace yourself if you have a delicate stomach and an unfamiliarity with eating insects), they pop juicily in your mouth. An acquired taste? Yes. It took me trying to impress my Korean date to want to taste them a second time. But after the initial hurdle that accompanies wildly unfamiliar cuisines, I’ve begun to enjoy eating silkworms.

Aside from their debatable qualities as a “delicacy,” there are two other, environmentally-conscious motivations for eating silkworms. Firstly, there’s the “waste not, want not” reasoning behind eating silkworms after they’ve produced the silk. This logic presumes that if they weren’t eaten, they would become a waste product. The second reason touches on health and climate change. Simply put, insects don’t have the large carbon footprint of cows, pigs, and chickens. Moreover, many insects (silkworms included) have been found to be a rich source of protein, fiber, and some vitamins and minerals. They’ve even been eyed as an option for a protein-rich space food for astronauts.

Silkworms are also one of the only two widely domesticated insects (the other is the bee). This might just make silkworms the healthiest and most environmentally benign domesticated food animal in the world. And while silkworms may not make it to the top of the menu in Europe or North America (which admittedly have their own strange foods), it does give the adventurous gourmand something to chew on.

With the silk wrapped around her finger and the insect in her tea, I wonder if Empress Xi Ling-Shi could have guessed what a strange delicacy had fallen into her cup!