“I Am No Lab Rat”, Campaign Against Genetically Modified Foods Spreads Across India

Home » Blog » Food » “I Am No Lab Rat”, Campaign Against Genetically Modified Foods Spreads Across India 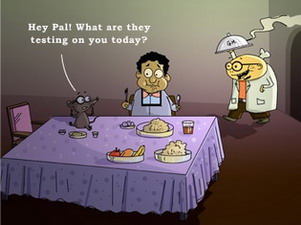 Launched by the Coalition for a GM-Free India and Hamara Beej Abhiyaan (‘Our Seeds’ Movement), “I am no Lab Rat” is a unique consumer awareness campaign aiming to sensitize the citizens on the impacts of producing and consuming GM foods.

The campaign came as a response to claims by those in the GM industry that Bt Brinjal, a GM brinjal variety containing the toxin producing gene from the toxic bacteria Bacillus thuringiensis, is ready to be introduced into the markets. Bt Brinjal (egg plant) is only one such crop in the pipeline— others like Bt Rice, Bt Tomato, Bt Cauliflower, Bt Cabbage, GM Potato, GM Mustard etc. are all in the process of being commercially released.

According to the proponents of the I AM NO LAB RAT movement, India is the Center of Origin of Brinjal while at the same time no such vegetable crop, one that is more or less directly consumed, has ever been allowed and cultivated anywhere else in the world. “Why is it that Bt Brinjal is even thought of being allowed to poison our food?”, is what is asked in the petition to the Health Minister of India.

The campaign is also asking the government and informing the people at large, about the various studies carried out on GM crops for consumption and the findings of concern in these studies. The campaign is also sensitizing people about the fact that once the GM crops are allowed to be cultivated, there will not be any choices left for anybody – even if someone does not want to consume GM crops – as all crops will look same from the outside. And the only option will be to boycott brinjal completely!

Students, citizens, film stars, media personalities etc. have all joined hands and are working to spread the word on this campaign and on the larger issue of the threat to India’s food sovereignty. Alternative methods of securing food production are also being highlighted through this campaign, that is now quickly spreading from one city to another.

Read this week’s articles on foods and farming around the world:

AFRICA – Food and Farming Around the World: Recipes for Healing with Nature in Africa from Shea Terra Organics