Senator Jeff Klein to Cyclist: Get out of my F***ing Way

Home » Blog » Updates » Senator Jeff Klein to Cyclist: Get out of my F***ing Way 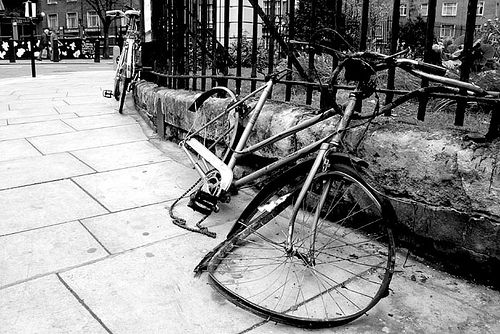 The letter below reminds me a lot of something that happened to me.  I was riding down 10th Street in the right hand lane.  Rather than pass me in the empty left lane, a giant SUV swerved towards me, nearly running me into a ditch.  At the next light, the driver rolled down the window to shriek that I should be riding on the sidewalk (untrue/illegal), and he knew because he was a cyclist, too!  I guess he was a cyclist with no belief in Karma?

Colin Beavan, aka No Impact Man, had a run-in today with a NY state senator today.  Or, I guess, you could call it a near run in?  Here’s his open letter to Senator Jeff Klein:

RE: My request, as a member of the board of Transportation Alternatives, to meet with you to discuss transportation policy as it relates to bicycle safety, carbon emissions, the cultivation of New York City quality of life, breathable air, and traffic congestion.

Though you may not know my name, you may recall that you and I met today under rather unpleasant circumstances on New York City’s Broadway, just north of City Hall. You were driving your black Mercedes. I was riding a small folding bicycle and wearing a purple helmet.

To refresh your memory:

Traffic was moving rather slowly and you were heading in the downtown direction, as was I. You were in the far left lane and I was riding on the curbside of that lane, near your rear passenger door. Suddenly, you began to veer your Mercedes to the left, potentially crushing me between your car and the cars parked on the side of the road.

With nowhere to go to get out of your way, and to avoid serious injury or death, in desperation, I chose to knock on your window to let you know that I was there and that you should avoid veering further in my direction.

At this point, you brought your vehicle to an abrupt halt, not to avoid hitting me, but because you apparently needed to communicate something to me. You rolled down your window and said, “Get your hands off my car, you [f***ing a**hole].”

I said, “You were veering into me and going to crush me.”

This gave me the impression that you were threatening me.

I said, “I think my life is more precious than your car.”

I said, “If you’re driving a car, it’s your responsibility to see what’s in road space before you veer into it. That’s what your driver side mirror is for.”

You said, “I looked in my mirror.”

I said, “You should also turn and look over your shoulder since you know there could be a bicyclist.”

You said, “Yeah. Well, maybe you should watch where you’re going.”

I said, “Where was I supposed to go? I was there. And you were veering into me.”

I was about to remind you that, in the past week, two cyclists have been killed by automobiles in New York City, but you made a gesture which implied you considered this conversation a waste of time and drove off. That is when I saw that your car had special license plates proclaiming your membership of the New York State Senate.

A red light stopped you at the next intersection. I rode alongside you and, more cautiously, tapped again on your window. You rolled it down. I could tell by your face that you weren’t happy to be talking again to this particular New York State citizen, on whose behalf you govern.

I asked you, “What is your name, Senator?”

You said, “Senator Jeff Klein.” This is how I know it was you.

Now, the thing is, Senator, I don’t particularly call you to task for calling me a [f***ing a**hole]. If the roles had been reversed, and I had a big black Mercedes and you came up in a purple helmet, knocking on my window, and I didn’t realize I was on the verge of crushing your legs, I might have called you a [f***ing a**hole], too.

I’d like to point out, however, that, as mad as you were about my touching your car window with my hand, you could double or triple that strength of emotion when it comes to how frightening it is to be on the other side of the Mercedes driving wheel, especially when that particular Mercedes is coming toward you.

Weigh it up: “he might scratch my black Mercedes” against “he might cause my little girl to be left fatherless.”

Weigh it up again: One guy is riding a bike that weighs a grand total of 22 pounds and has a relatively small potential to harm others. The other guy is in charge of a powerful machine that weighs a couple of tons. Which person has the greater responsibility to watch out for the care and welfare of people who may get in their path, by their own fault or not?

As a State Senator, I’m sure you especially feel the weight of the obligation to look out for the welfare of others, no?

Again, this is not to say you did not act like many other humans in the same situation. But it is to say that transportation policy in New York City currently falls way too short of making sure that unintended confrontations like ours–and worse ones that end in fatalities–don’t occur.

Proper policy, which provided ubiquitous segregated bike lanes or which limited traffic congestion, could reduce such incidents without having to depend on drivers of black Mercedes, for example, remembering to look in their driver side mirror or over their shoulders.

It is for this reason that I hope you will honor my request to visit your office, along with Transportation Alternatives Executive Director Paul Steely White, to ask you to reconsider your current platforms on transportation and traffic congestion in New York City.

As you know, the United States’ dependence of foreign oil contributes significantly to our current economic crisis and is a matter of national security. Furthermore, the planet’s future ability to support human life is in peril because of global warming caused, in large measure, by the overuse of the same foreign oil.

At the same time, countless studies show that making the streets of New York and other cities safer and more convenient for bicyclists and pedestrians would reduce automobile use, dependence on foreign oil, carbon emissions, and traffic congestion while contributing to breathable air and livable streets, improved retail business, and the physical health of New Yorkers.

Yet, until now, your platform has presented obstacles to the adaptations that might bring these benefits to New York City. Not only did you oppose congestion pricing, a measure intended to decrease vehicular traffic, but you proposed eliminating the tolls on bridges and tunnels into Manhattan on holidays, which would bring more traffic into the City and further encourage automobile use, just when it should be decreased.

I hope you’ll consider that these policies are out of step with the current times. I hope, too, seeing, in the case of our confrontation, the result of your policies when it comes to impact on personal lives, in general, and the safety of bikers, in particular, might also give you cause to reconsider your position.

Policies that make New York City safe for bicyclists and pedestrians–the people who live on the streets as opposed to the people who just drive through them–is best, both for our citizens and the planet.

I look forward to hearing from you regarding my request to meet in person to discuss these issues.

Colin Beavan
aka No Impact Man,
Board Member, Transportation Alternatives

He asks, if you support his request, that you call or email the senator or someone more senior: Senator Malcolm A. Smith.
You can reach Senator Klein at: 718-822-2049 or jdklein@senate.state.ny.us

It breaks my heart that someone in a position of power would behave this way towards a bike commuter. Motorists and cyclists don’t have to live at odds, and these are the folks who are supposed to be setting a positive example.

Update
If you’re looking for details on Colin Beavan’s meeting with the Sentator, you can check out how it went in the over here.