The average man living in forest-prone areas and who depends on meat from endangered apes and other wildlife for his proteins plays the role of a carrying agent for the hundreds of infectious diseases that humanity is suffering from.

Now experts are warning of the danger to humanity this lifestyle may be posing. Most of these diseases, identified in medical terms as zoonotic because of their ability to jump from animal to man, have been labeled as “emerging infectious diseases” or EIDs.

Over 60 percent of the 1,415 infectious diseases currently known to modern medicine are capable of infecting both humans and animals. Most of these diseases originated in animals and now infect people and include viruses, bacteria, fungi, protozoa and helminths, with 175 pathogenic species associated with diseases considered to be ’emerging’.

Between 1972 and 1999, 35 new agents of disease were discovered and since then many more have re-emerged with renewed vengeance after long periods of inactivity, or are expanding into areas where they have not previously been reported, according to World Health Organization (WHO). These include tuberculosis, malaria, and cholera.

Public health professionals from across the globe met in Atlanta in March for the sixth International Conference on Emerging Infectious Diseases, to discuss these and other emerging pathogens and current work on surveillance, epidemiology, research, bioterrorism and more.

The dissemination of EIDs, responsible for causing over 14 million deaths annually, is fueled by social factors, such as migration, poor living conditions and civic riots; customs and diet of different nations; specific qualities of microorganisms, such as a change in virulence and toxin-producing ability and resistance.

Other factors include the activity of health care systems, development of new medical devices and massive application of immuno-depressants and antibiotics.

Wildlife Conservation Society reports that as humans progress ever further into the forest, the risk of disease transmission between humans and wildlife becomes greater. Many diseases can move back and forth between species, mutating into more virulent, resistant forms.

Myths aside, it has been claimed that the HIV/ AIDS virus may be such a case, as it is thought that it entered human populations through the consumption of non-human primates. The origin of HIV has been found in wild chimpanzees living in southern Cameroon. 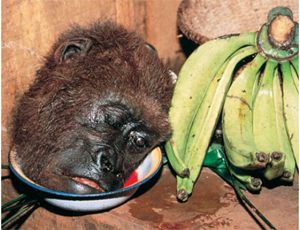 In the Congo, the communities that rely on wildlife for their protein are vulnerable to pathogens from the forest. Subsistence hunters sometimes take advantage of animal carcasses for food, potentially infecting themselves and their families with disease diseases in the process.

Dr William Karesh, a WCS veterinary expert, believes the threat of potential pandemics such as Ebola, SARS, and avian influenza demands a more holistic approach to disease control, one that prevents diseases from crossing the divide between humans, their livestock, and wildlife.

But this may not be good news to a good number of Africans necessitated by poverty and high food prices to rely on bush meat, including gorilla and other great apes meat, and who may be courting, among others, various new encephalitis and hemorrhagic viruses, Lassa fever, and Ebola virus.

A recent WCS survey in a remote village on the border between Gabon and Congo revealed that about 18 tons of bush meat were sold and consumed in a particular period of time. As wildlife conservationists and medical experts bite their teeth, an average 17 species are killed per day, corresponding to a biomass of 65kg per day.

Photo credit: (top) mape_s via Flicker under a Creative Commons license; (above) Primatology.net