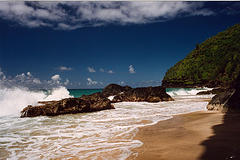 Oregon: the land of volcanoes, beautiful coastline, forests…and trash? Unfortunately, that might be the case if Hawaii gets its way.

According to the Portland Tribune, Honolulu is quickly running out of space in their main landfill. In order to prevent overflow, the city has hatched a plan to send ships full of garbage up the Columbia River in Oregon, where trash will be put on trucks and trains headed to the Columbia Ridge Landfill.

It may seem strange that Hawaii wants to send its trash to a state known for being so environmentally conscious. Interestingly enough, that’s exactly why they want to do it.

Oregonians recycle over 50 percent of their waste, so the state has plenty of excess space. And Hawaii isn’t the only state taking advantage of this generosity. Oregon is the fifth largest importer of garbage in the country, and nearby Seattle sends over 2 million tons of trash a year to the Columbia Ridge Landfill.

Is this how we want to treat states that recycle? It is certainly true that other states have to put their trash somewhere, but it is a shame that we are rewarding Oregon for environmental awareness by giving them  excess trash.