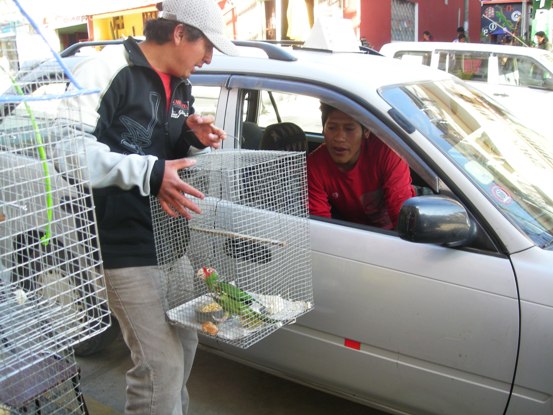 Several days ago, I read a story about how Peru’s butterfly exports had increased 43% from January-April of this year. These are the butterflies that are pinned into glass frames for sale as gifts and souvenirs. I wondered if all of these butterflies included those that are exported illegally and those that are endangered. Questions of this kind were on my mind as just several days earlier my family had passed by a street vendor who sold animals illegally.

One of the animals was a baby monkey, caged and frightened. We live in the highlands region of Peru, so the monkey was far from its former home in the rainforest. My wife, who in the past worked as a biologist throughout Peru, told me that she thought this was an endangered monkey. As we walked home, I wished I had brought my camera. This I thought, is a story that needs to be pursued.

Yesterday, I went with my family once again to see the animals sold by the street vendor. This time I took my camera, hoping to take a photo of the monkey. Unfortunately, the monkey had been sold. My wife had told me that it was probably a Brown capuchin monkey (Cebus apella). Despite not finding the monkey, the photos I did get were probably even better.

Just as we arrived, a man in a car pulled up and inquired about one of the larger birds that was being sold. He ended up buying the bird, probably a Scarlet-fronted parakeet (Aratinga wagleri), for 33 nuevo soles (approximately $11 American). Watching the vendor get the bird out of the cage was painful. The stressed bird pecked at the man’s hand as much as he could. Once the vendor succeeded in grabbing the bird, he put it in a brown paper bag with a piece of corn. I told my wife, “At least he gave it something to eat.” She then told me, “Those type of birds don’t eat corn though, they eat fruit.”

After spending several hours searching on the internet for information about Peru and South America’s illegal wildlife trade, my wife and I were surprised that so little information was easily available in english or spanish. For this reason, I hope to write a follow-up article in the future with more information about this important subject. Here are the more interesting tidbits of information we found.

Did you know that the United States is second only to China as the biggest market in the illegal wildlife trade? The European Union has also significantly increased its role in the black market for wildlife, buying animals from Peru like the vicuña, a relative of the llama, that produces high-quality wool and is subsequently threatened by illegal trade.

Traffic, an international organization that monitors the illegal wildlife trade, estimates that in the 1990s the trade resulted in approximately 160 billion dollars of profit. That number has undoubtedly increased. Komodo Dragons, like the one featured in the Matthew Broderick movie The Freshman, according to one source fetch around $50,000. A toucan from Bolivia that might be bought for $10 there, can be worth $1500 in the United States. Once again, estimates vary, but the general consensus is that the illegal wildlife trade ranks at least second or third in its volume and profitability only to the international drug and gun trades. It’s possible that these trades are even interlinked, being facilitated by the same groups of people.

Why Illegal Wildlife Trading in Peru and Elsewhere Might Be Unstoppable

Several articles about Miami Airport’s wildlife inspectors are quite revealing as to why law enforcement can only go so far as to stopping the illegal animal trade. The constantly changing tactics of wildlife smugglers and the sheer volume of animals coming through places like Miami make it challenging to stop the industry. As of 1995, there were only five inspectors working full-time at the Miami Airport– and this is where the greatest amount of animal trafficking (legal and illegal) occurs worldwide. One of these inspectors estimates that only 10-20% of the illegal animals are found. Some smugglers, for instance, sew birds into their clothing or use other items to hide the animals. Last year, a man from Peru was able to hide his pet monkey in his ponytail for some time while on a plane. It was eventually discovered.

One recent scientific article claims that it is partly because of the lack of desire on the part of local Bolivian law enforcement officials that so many parrots from Bolivia, Peru, and Brazil are being smuggled. This negligence and desire to be uninvolved clearly shows that there are limitations as to stopping the illegal wildlife trade via law enforcement. What perhaps would be a more effective means to stop the trade would be to stop the demand for animals. Ceasing to make people uninterested in animals though, might be an even more impossible task. What is possible though, is greater awareness and education.

Why Education about Animals and Their Needs is So Important

Much of the illegal wildlife trade in South America and elsewhere occurs for the same reason that it does in the United States. People like animals, and want pets.

One paper about the illegal trading of sloths in Colombia helps to explain how locals are often also part of the trade. According to the source, children will often take sloths from deforested areas in Colombia and sell them to traffickers. People also hunt and kill mother sloths, taking the young to sell them (this is how many different species of animals are captured and sold throughout the world). The sloths can be seriously mistreated, and are often sold to Colombian national tourists traveling between the coast and the country’s inland areas, who are on vacation. These people don’t know what the needs of sloths are, even though they are willing to love the animals. Subsequently, the sloths often die.

This example, of course, depicts what commonly happens to many animals that become part of the illegal wildlife trade. It’s also hard to know which animals are endangered and which are not. I eventually discovered that my wife was not entirely correct about the parakeet and the monkey we saw being sold: they are not endangered. But while it turns out that these particular animals are more common than others, it is not an excuse for what is still an illegal activity. It underscores just how important education is about the illegal wildlife trade and the needs of pet animals. If you are confused by what I mean and are American, think about capturing a wild deer and then selling it. Can you imagine how hard it might be for you or someone with little education about deer to take care of one?

One last thing to ponder is that according to a segment in the book Fast Food Nation, “studies suggest that until the age of six, roughly eighty percent of children’s dreams are about animals.” This comment was made in the context of explaining how fast food chains use animals in their marketing to appeal to children’s innate interests.

Whether or not it’s comes from our experiences with stuffed animals or real animals, most of us grow a fondness for animals since the time that we are children. Pets are therefore most likely to always be part of human cultures. Without some means for us to determine how we can boycott businesses that sell animals and pets that are part of the illegal wildlife trade, we are probably at a loss to stop it. But perhaps, if we promote more awareness, we can help stop the demand for animals that are taken illegally from their natural habitats.

I hope to learn more about Peru’s illegal wildlife trade in the upcoming months, and I will report back with new information once it is available. Hopefully I will find something to be more optimistic about.