Solar thermal energy plants focus the glare of the Sun’s rays on a central location to create heat, which is then turned into electricity. Various methods exist to concentrate the solar radiation, including parabolic troughs, power towers with mirrors that track the Sun (heliostats), parabolic dishes, and Fresnel reflectors. See a history of solar thermal energy.

Status: Will begin operating as early as 2011.

More: To date, this field of power towers is the largest planned Concentrated Solar project in the world. Meanwhile, through contracts with a number of other solar companies, PG&E will soon be operating over 2,000 MW of solar energy. California state law requires each investor-owned utility to supply at least 20% of their grid with renewable energy. Source: PG&E [PDF]. Photo: Pictured here is Solar Two, also in the Mojave Desert, which has a similar design to the upcoming plant; WikiMedia.

Status: Will begin operating in 2011.

More: 20,000 parabolic dishes will be spread over 4,500 acres of desert. The dishes are each 40 feet tall and capable of producing 2.5 kilawatts. Source: Foreign Policy. Photo: Stirling Energy Systems.

Status: Eskom is currently considering whether to continue with plans for the project.

More: This project has been on the drawing board now for several years. If it gets the green light and is completed, it will drop South Africa from the 15th biggest CO2 emitter to the 25th.

The project relies on the power tower method of production. In this solar thermal variation, a circle of moving mirrors, or heliostats, track the Sun as it moves across the sky. The mirrors focus light on a central tower. Heat from this concentrated light can reach up to 600˚C. These rays heat molten salt, which is used to generate steam and power a turbine. Source: Engineering News; Eskom via Solar4Africa. Photo: Solar Two power tower, Wikimedia.

Status: Will begin operating in 2011.

More: Solel, an Israeli company, will use 1.2 million mirrors and 317 miles of vacuum tubing for the project. When complete, the solar field will cover 6,000 acres and bring power to 400,000 homes. Source: Ynet news; Solel [PDF]. Photo: WikiMedia.

Status: Scheduled to begin operating in 2012.

More: The Ivanpah Solar Electric Generating System (ISEGS) will consist of three power towers, connected at a central point. The heliostats being considered are just over 7 feet tall and 10.5 feet wide. Construction will take place in three phases, beginning with two 100 MW towers and finishing with one 200 MW tower. Plants will use a gas boiler only during morning times while the towers are warming to start the day’s operating more quickly. Source, photo: The California Energy Commission.

More: Known as the Solar Energy Generating Systems (SEGS) this is a group of nine concentrated solar plants. It’s currently the largest single source of solar energy in the world. By comparison, the largest operating photovoltaic solar plant to date, which is in Spain, produces 20 MW. The site has 400,000 mirrors laid over an area of 1,000 acres. The mirrors were built between 1984 and 1991. Sources: Florida Power & Light, The Energy Blog. Photo: WikiMedia.

Solar Company and Electric Utility: Mirrors by Abengoa and power tower by ALTAC.

More: With the completion of other solar energy plants in the same area, the total energy production will be about 300 MW. The current power tower stands 115 meters above the surrounding sunflower fields. 624 heliostat mirrors focus sunlight on the tower. Source: Environment News Service; BBC. Photo: WikiMedia.

More: This project, which will utilize Fresnel reflectors, will help Florida to meet its goal of 20% wind and solar energy. Currently, the state of Florida receives half of its power from natural gas and another 20% from nuclear. Florida Power and Light has already identified the location of 1,100 MW of new solar plants. Sources: St. Petersburg Times; Energy Business Review. Photo: WikiMedia.

More: The plant, being built by Spanish solar company Abengoa, will cover 1,800 acres and offer 1,500 jobs. The solar field will power an estimated 70,000 homes and keep about 400,000 tons of CO2 out of the atmosphere. Source, photo: Abengoa.

More: The Beacon Solar Energy project will use 500,000 parabolic troughs over an area of 2,012 acres. Once in operation, the plant will employ roughly 1,000 workers. Sources: Green Wombat; Florida Power & Light. Photo: Green Wombat.

Status: Scheduled to begin operating in 2010.

Status: Plant will begin operating in 2010 and reach full capacity by 2013.

More: When fully completed, the solar field will power about 45,000 homes in Australia. By 2030, Mildura may be producing as much as 5 Gigawatts of solar energy. Source: EcoWorldly via Foreign Policy. Photo: Solar Systems. 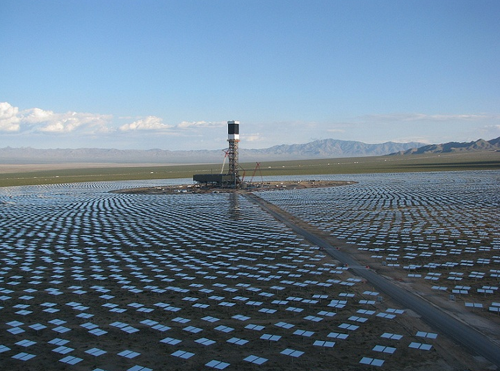