Dishing Up ‘Pizza With a Conscience’

Home » Blog » Updates » Dishing Up ‘Pizza With a Conscience’ 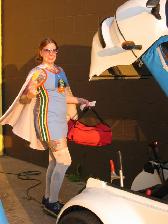 The next time you’re in Minneapolis and struck with a craving for pizza, you can satisfy both your hunger and your desire to save the Earth by giving Galactic Pizza a ring.

The uptown eatery, which was recently featured on CNNMoney.com, goes to exceptional lengths to be eco-friendly. When the Minnesota weather cooperates, for instance, Galactic Pizza employees (costumed as unique superheroes) will deliver your order by electric car. The restaurant also gets its power from wind energy, sends some of its food waste to local pig farms and prints its menus on hemp.

The pizzas, too, are created with a green philosophy: many of the ingredients come from farms in Minnesota or Wisconsin, other ingredients are organic and the mozzarella comes from non-rGBH cows. Even vegans can find a menu item to their tastes, with choices including vegan mozzarella, vegan chicken and mock duck.

Some of the special pizza choices featured at Galactic include the CSA Pizza, whose toppings vary according to what’s in season at the Natural Harvest CSA; the Second Harvest Heartland, which generates a $1 donation to Minnesota’s Second Harvest every time it’s ordered; and the Paul Bunyan, which features toppings native to the Minnesota landscape, including morel mushrooms, wild rice and bison sausage.

All these features and more explain why Galactic Pizza’s motto is “Pizza With a Conscience.”